This is Part 4 of my trip to Nepal.  If you missed the other parts you can find them here.

On the way into Nepal we were forced into a race track holding pattern over the airport.  Usually being delayed is NOT a good thing.  However, when you have an unobstructed view of an incredible mountain range, and plenty of time to snap a LOT of photos in which to assemble a panoramic of the whole thing, you end up with this:

The final image I made is 35476 X 3247 pixels.  The one you see above is shrunk by 90%.  I’m pretty certain I am going to have this printed out, and hung across my bedroom wall just below the crown molding.  Nothing like waking up to a big crazy mountain range every morning to make you realize…. well whatever giant mountain ranges make you realize.

I think I took over 100 photos while we circled about, and even a video.  Here it is, in the beginning of the video you can even see Mt. Everest (known in Nepal as Sagarmāthā).

Coming in to land, it was cool to see steppe farming.  Now that I’ve been in Kathmandu for awhile, it’s incredible there is any farming, especially so far up the valleys.

As we got closer, I could see little cities nestled nicely in the valleys.  I think these would be really cool places to visit.  Assuming I could speak Nepali. 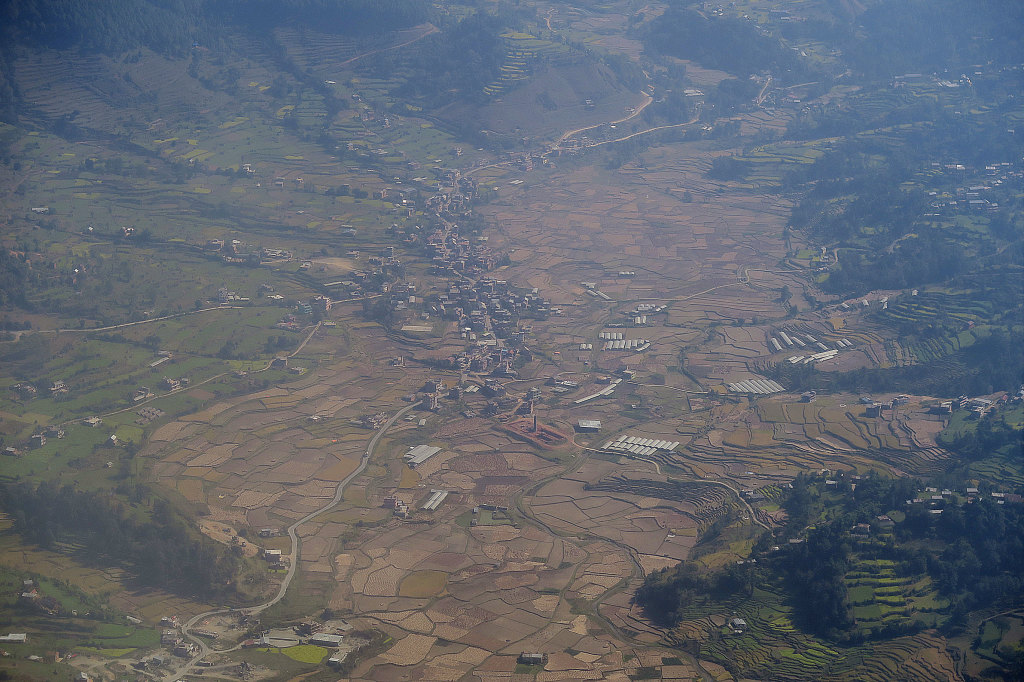 As we get closer to landing, we can see the city become busier 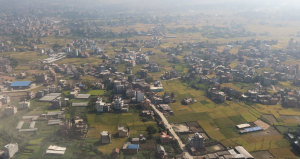 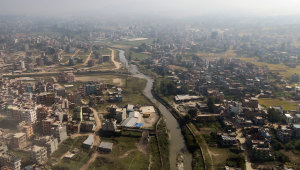 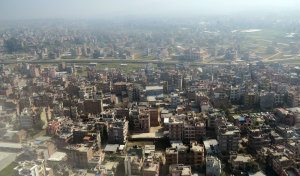 and then boom, you’re in the airport parking lot waiting for the shuttle to take you to your hotel… 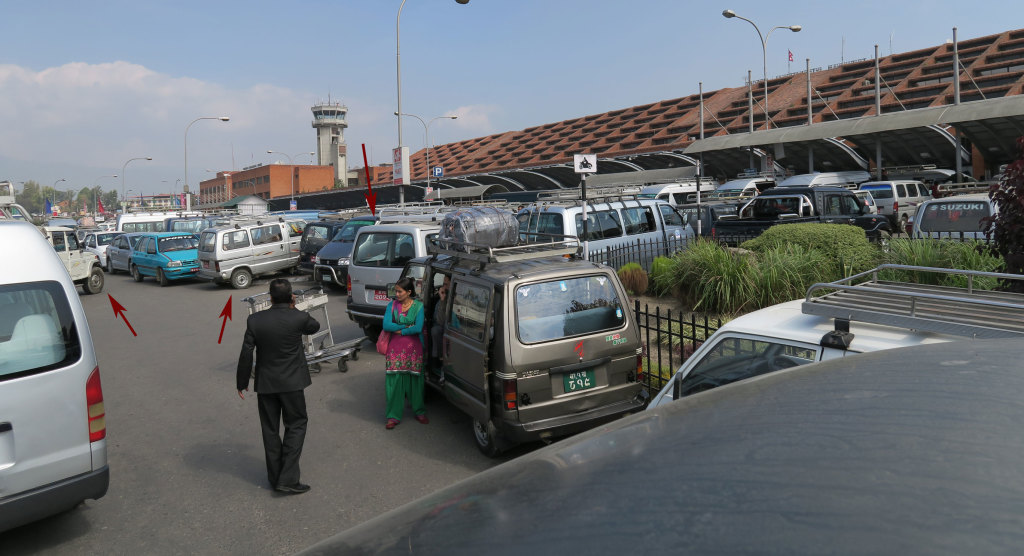 So do me a favor with the photo above.  Click on it, and make it real big.  In that photo you will find 3 arrows.  Starting from the left, that is the exit.  Even though there is a large SUV parked there, that is the exit.  Technically, I’ll later learn this is the entrance.  I’ll also learn that directions, lanes and most any traffic rule you can think of doesn’t apply in this country.

The second red arrow is a car that couldn’t find a parking space, so he just parked on the curb.  Well, at least half of his car is on the curb, the other part is hanging out in the entrance.  The third red arrow is the in and out of the area to pick up passengers.

As you can see, they are parked 4 across in this area.  I personally defy you to think of a way a car could possibly be parked and NOT find it in this photograph.  Any orientation (as long as the wheels are down) and you should be able to find it here.

Suddenly the cops at Dulles airport who chirp the sirens if you wait for longer than 45 seconds seem rather strict!

Let’s play a game, guess how long it took us from the point the driver got into the van, to when we actually left the airport.

I’m not big on animated gifs, but I’ll make an exception. Here is an animated GIF to provide you a clue.

How long do you think it took to travel those 4 frames?  10 minutes? 20 minutes?  How about 32 minutes!!  Yeah, I’m amazed too.  That wasn’t how long it took to get to the hotel.  That was just how long it took to get about the length of one soccer / football field.  While there were no birds flipped, swears strewn or fists pumped, there were a few horn honks and cutoffs.  I was (at this point) amazed 19 fights hadn’t broken out on the streets already.  Amazing.

How many people would be killed if any of this happened in the US?

Watch the video below.  Here are some things to watch for..

We are now passing the great Kathmandu Mall.  I’m sure it is great for Kathmandu, but WHOA, looks a bit sketch to me.  In the foreground are what I would consider Tuk Tuks.  However, what I know about Tuk Tuks are that they are for hire.  On the road I saw as many as 15 people crammed into one of these things.

While life is hard in Kathmandu, I just don’t think 15 people got together to share cab fare.  So I think these might have been tiny busses. 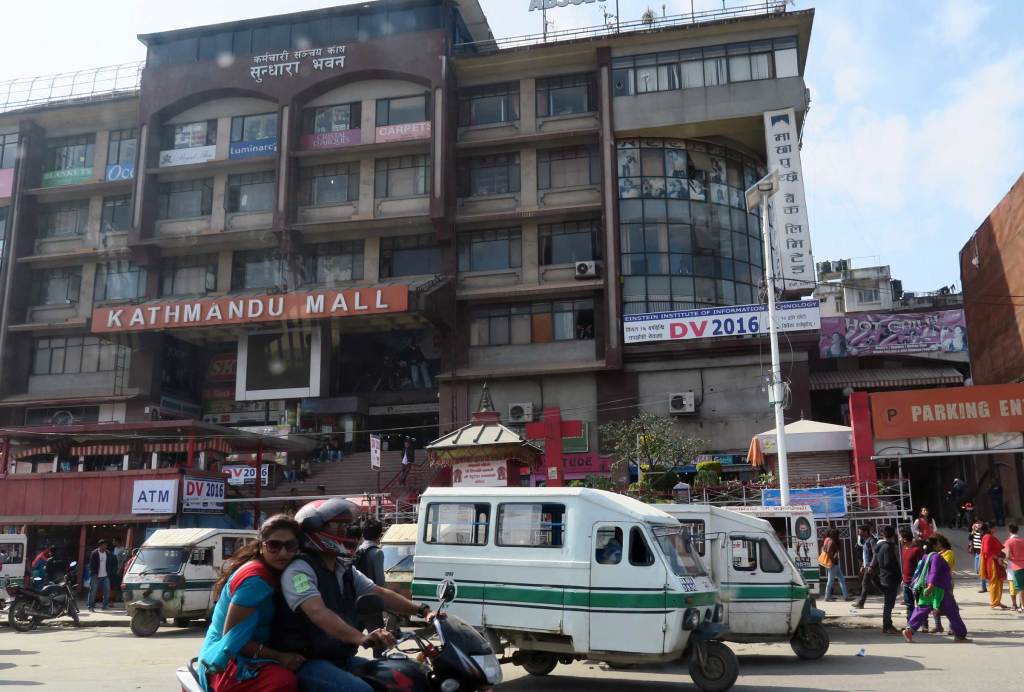 Also note the location of the Einstein Institute of Information Technology DV 2016.  You know, in case you wanted to study abroad.

In case you were wondering what the inside looked like… 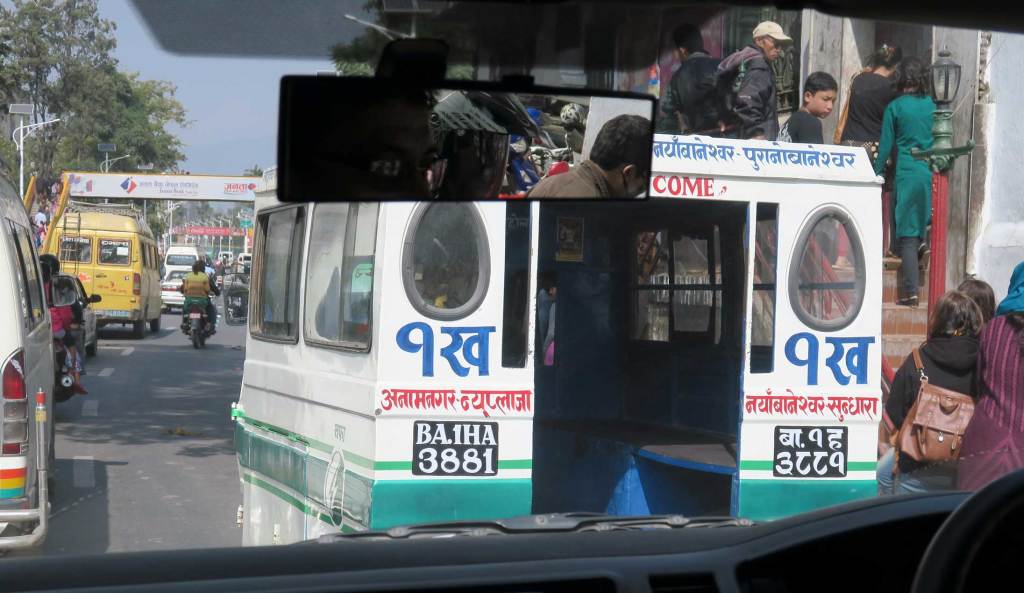 I finally make it to my hotel. 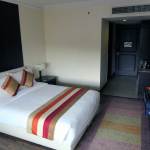 It is actually a really nice hotel.

One of the things I am learning about Kathmandu is that while the street side of things might be hustle bustle and dust, as soon as you get behind the front facade, things are quiet, peaceful and nice.

For example, this is the rather tranquil view out my window.  Just after I take these photos they start to setup for a wedding reception (with a trampoline, which is AWESOME). 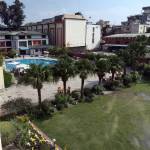 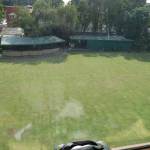 In my next post, we’ll finally hit the streets of Kathmandu, and visit an artist at his Thanka art school.