I’m now the owner of a Mexican Restaurant Website

There are two places I like to visit when I am in Williamsburg.  For dessert you can’t beat Handel’s Ice Cream.  Now, I grew up in Milwaukee, so I know a thing or two about ice cream, and custard.  Our family was known to go to Kopp’s Frozen Custard on a weekly basis.  We’re also know to be somewhat over weight.

When they opened Milwaukee’s Frozen Custard in the Northern Virginia area, I was thrilled!  They actually had photos of some of the Milwaukee places around.  It was cool to see the places I had visited as a kid.  I could actually name them, and imagine being in there again.  Pretty cool.

Handel’s Ice Cream is ice cream the way it should be.  It is made with care, and excellent ingredients, and the flavors are varied and simple.  My favorite so far as been Graham Central Station.  Ice cream flavored like Graham crackers.  How cool?  Add in some caramel, and Mmmmmm.

For dinner I like to go to Taco MexiCali.  Here are some of the reasons:

The food is made with care, and just like Handel’s Ice cream (which happens to be right across the street) with good ingredients.

So when I went looking for their menu so I could give my family that extra look they need to figure out what they are going to have, I of course went to google.

My search yielded this result: 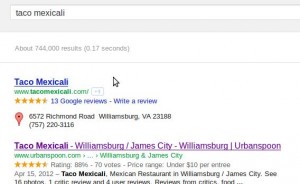 That’s awesome I thought.  I can go to the website, and hopefully they will have a menu.  So I clicked on the first link, and got this.

Then, being the nerd that I am, I looked and the domain wasn’t even registered.

Google usually does a good job of NOT making the first link a website that doesn’t exist, so it seemed to me that someone forgot to renew their domain name.

Now, I’ve watched enough food channel network to know that running a restaurant is an incredibly tough business.  One of my good friends Kate used to own (and run) Trilogy Pizza in New London, WI.  I helped her with some technology stuff, and volunteered behind the bar.  She showed me a little bit of what it was like behind the scenes to run a restaurant.  She showed me enough to know that volunteering behind the bar is as close as I ever want to get to working in a restaurant.  I think EVERY job at a restaurant is grueling, AND you have to deal with people!

Getting back to the story, I called the restaurant, and asked if they had a website.  They said “We do, TacoMexiCali.com“.  They didn’t know they didn’t.  Ugh, computer people can be so out of touch.  Why would you let this happen?

So, having a few minutes before we went to eat, I dropped $5.19 and purchased the domain.  I went to the restaurant, and asked the gentleman behind the bar (usually the owner or someone in charge, as liquor is the first thing to make a restaurant make or earn money) about the website.  He said that they WERE working with someone, but … well.. it seemed to trail off at that point.  But it didn’t sound like it was a good dissolution of support.

I told them that as soon as they have found a new web developer, I would be happy to transfer the domain to them.  I just didn’t want them to think I was some scum domain name squatter.

They asked me for a card (and of course being on vacation I had none) but dropped them my HandyNerds.com information.

Thus… That is how, I guess I became the website developer for the best Mexican restaurant in Williamsburg (and frankly, I bet in all of Virginia).

Hmm, maybe I should stick to Panera Bread!