Home Mister Dude Martesh on the streets of Thamel

Martesh on the streets of Thamel

This is Part 5 of my trip to Nepal.  If you missed the other parts you can find them here.

What happened on the first day I was there?  I went walk about.  I do this just about everywhere I go.  One of my favorite times of a trip is walking around, sometimes with headphones, and sometimes just listening to the city.

From my hotel I headed west into a place called Thamel.  It was Sunday, so it was a slow day for them.  Yeah, the pictures you are going to see show a slow day.  What I later came to realize is that if you aren’t walking shoulder to shoulder with someone and have 3 motorbikes and a small taxi honking at you from ahead and behind, then most likely you are REALLY lost and probably about to step on a dead rat.  I’m not making this up or exaggerating, I almost stepped on three dead rats. 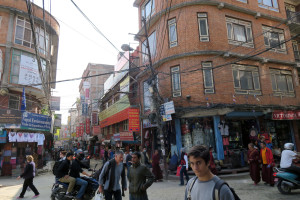 his shot really gets you a good overview of what the streets of Nepal have to offer.  I was walking around in pants and a t-shirt.  I guess it was the cold season there because as you can see all the locals are wearing long sleeves, scarves and in some cases sweaters.  I wonder what this place is like in the rainy summer season.  I have to believe hot and muddy since everything seems to be made of dust.

The buildings you see are typical of every place you can imagine in Kathmandu.  Shops and stores on the bottom, with living and in some cases warehousing above.  Most of the stores are just single wide garage doors with a store inside.  However, if you ask to see “more” you are suddenly whisked into a doorway (which you probably didn’t see before) and up a set of marble stairs (all the stairs in all these buildings seem to be marble, like you’d see in an old US government building).

You walk into a door and find these kinds of views: 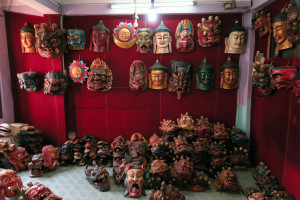 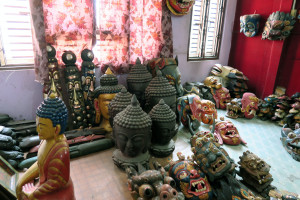 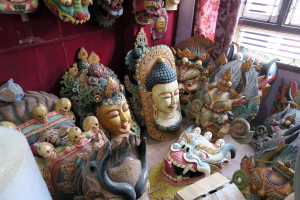 We popped into a couple of stores and asked to see more, and wow did we ever.  I’ll show you some of that coming up, but it was always interesting, even though you were walking through some pretty strange looking hallways.

The stores really differ and I only found one spot trying to be a consolidated area for clothing.  Otherwise you will see a paint shop, a butcher, a knife shop, and a t-shirt shop right next to each other.  Thamel is known as the tourist shopping area.  This is where you want to go if you want to by some touristy stuffs.

One of the coolest things I saw was at a T-Shirt shop.  They had all sorts of t-shirts you could by with just about anything on them.  But the thing that amazed me the most is that this one shop had three guys in it, and one of them was literally MAKING the t-shirt while we watched.  Check it out: 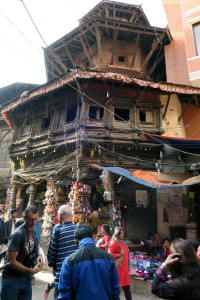 Kathmandu actually means Wooden Shelter and this is the oldest temple in Kathmandu.  There is a small shop at the bottom and people living in it up top.  How do I know this?  I asked my guide Martesh!

Yeah, I might have been a bit of a mark, I’ll let you decide.  As I was about to head back to my hotel room, a friendly gentleman walked along side me and started talking to me.  Asking the usual questions of where I am from, what am I doing here, and the population of my country. (Does anyone really know the population of their home country? I do now, only because I was curious, but is that a frequently asked question on travel?)

Martesh explained to me that he is a Thanka artist (we’ll show you that in a bit).  He said that today was his day off and that he would be happy to show me the city and practice his English at the same time.  Figuring I was was much larger than Martesh, could probably outrun him, and there were people EVERYWHERE I decided to let fate take the wheel, and went with Martesh. 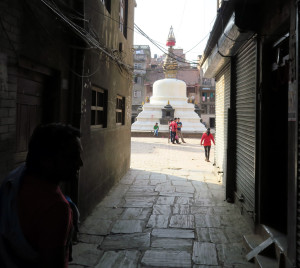 Martesh was a really knowledgeable guy.  He was familiar with all the religions represented in Kathmandu which is… all of them.  However, Hinduism is the country’s specialty.  One of the things that Martesh showed me are these areas “off the beaten path”.  It was interesting that you could be walking along the busiest street (dirt path) in KTM, take a turn and all of a sudden end up in a place like this:

You’ll also notice that the pathway into the court also has the closed garage doors.  It was Sunday, so many of these places were closed.  Walking in, you could see many people’s houses centered around this. 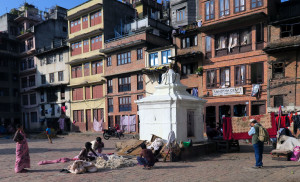 There were people over to the right that were beating Yak hair.  There were 3 of them, and each one of them took a whack at the pile making a really rhythmic thump-whump-thump over and over again. 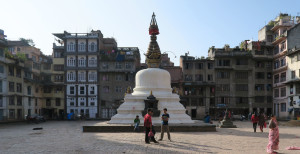 There was only one entrance to this place.  I guess during rituals (which They just had) they come over to these areas and paint the central mandala with colors.  You can see that it was recently repainted white and there is one red splotch just off center to the left above the head of the guy on the left. 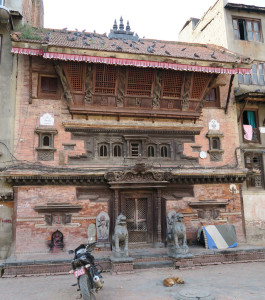 Behind the mandala was the temple of the square.  Each one of the temples were for a specific god.  I am told that this one is for the musically inclined, and that once or twice a week the musicians all gather here and play music.  No music here though tonight.  You can see a tiny version of the god on the lower left of the temple, available to those who want to offer their prayers and offerings when the temple is closed. 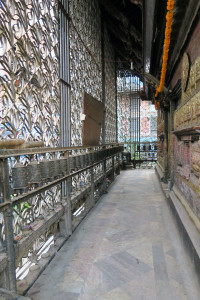 We continued looking at other temples.  What I didn’t know then was that it was customary to walk in a clockwise direction around the temples.  The prayer wheels (which you will recognize from The Golden Child) actually have the words / syllables Oṃ maṇi padme hūṃ on them.  4 Words, but broken up into 6 syllables: Om-ma-ni-pad-me-hum. You know when you pretend to do yoga or meditate and you say Ohm?  Well you are actually saying the first word / syllable of the prayer wheels.  You say them while you walk around the temple an even number of times.  Each word has a different meaning.  At this point, if you are thinking… wow, walking around a temple sounds so old school and … old.  I bet my religion doesn’t do anything like that.  Think again.

The Om-ma-ni-pad-me-hum will also come back with us in a bit, so keep it in mind.

We travelled through a lot of temples seeing the different constructions, histories and gods and goddesses.  Some of the temples had little obelisks for different religions.  One actually had an obelisk for all of them, Judaism, Christianity, Buddhism, Taoism, and others I couldn’t easily recognize.  It really seemed that although the culture and majority of the religion was Hinduism, all others were welcome.

Finally after quite a bit of walking around  took me (as promised) to his Thanka school.  The school wasn’t actually located where we went.  It was further out in the countryside where the students (which Martesh was) could meditate, concentrate and work on these paintings.  Many of these paintings were done using a single yak hair to paint some of the lines.

The paintings were intricate and beautiful.  However, this is where I realized that everything leading up to arriving at the school was prep for me to purchase one of these Thanka paintings.  These were beautiful, and I was interested in them. 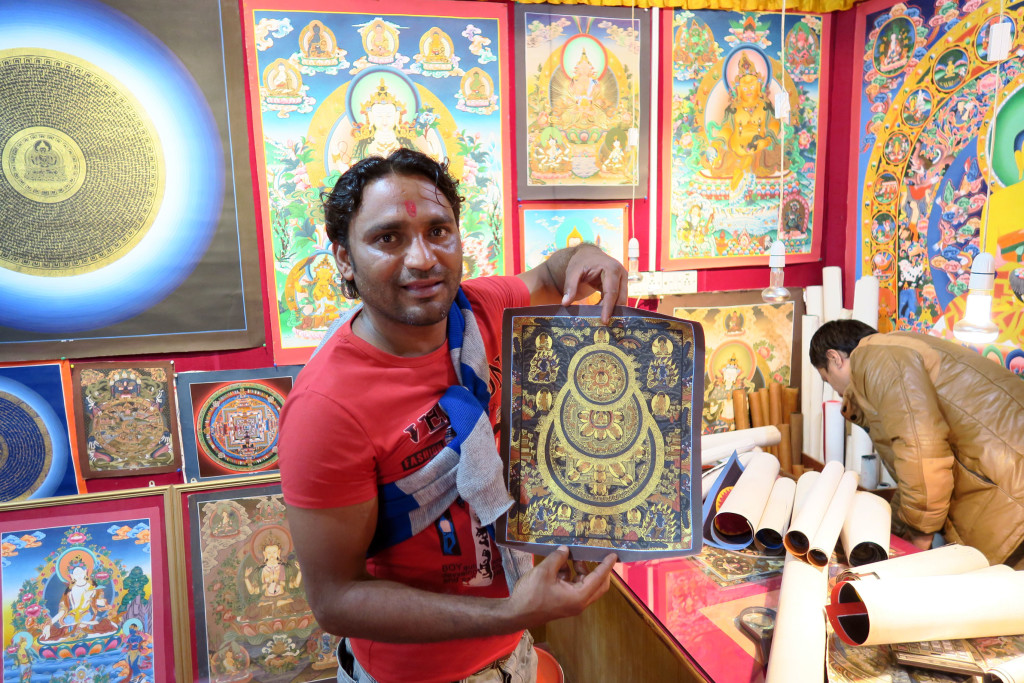 Here is Martesh holding up one of his paintings.  The one I was really interested in was over his right shoulder on the left part of the photograph.  The blue colors were incredible.  There were also others with striking colors with more of an astronomical design to them.  However, that blue one, that was about $400.  I like art, and it was a great tour, but $400 was too much to spend. 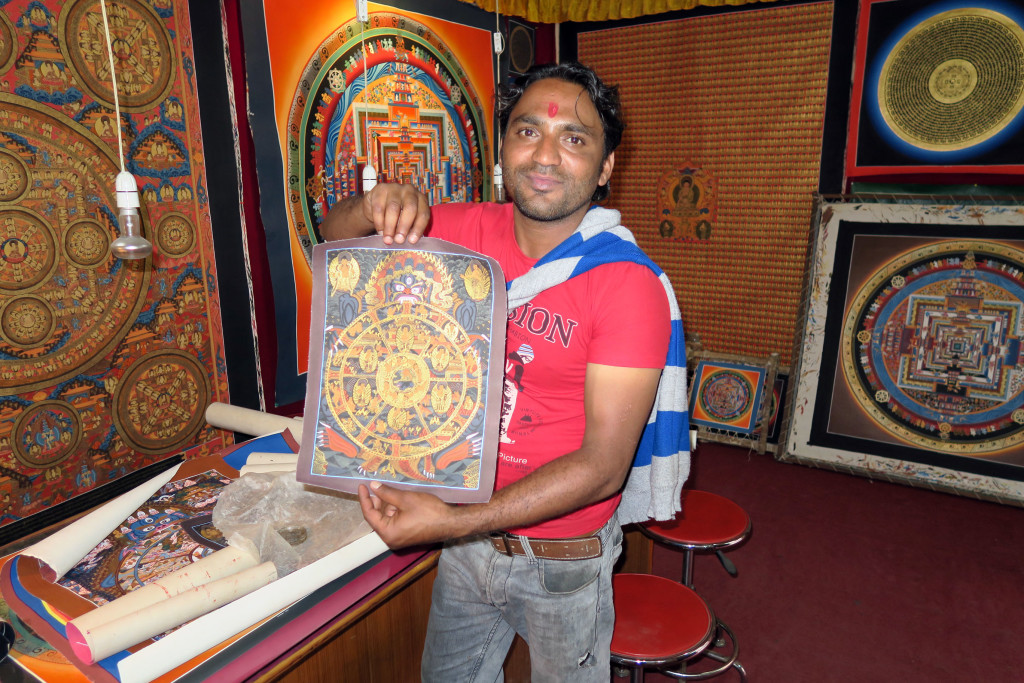 I ended up getting this painting for $40.  It was created by Martesh (or so I am told, I have no way of knowing) and has the 6 words (om-ma-ni-pad-me-hum) that we recall from the prayer wheels, which actually correlate to the 6 different kinds of life in Hinduism.  It also has other significance, which you can read about.

Remember when we talked about walking into the square and seeing the round white mandala?  Well they make paintings of those too and today mandala refers more to the painting than to the structure.  In this photograph if you look above his top hand, or all the way to the right you will see a circle with some squares inside of it.  This is the view of the mandala from above.  It might take a few flips back and forth, but sure enough, that’s it.

All of this artwork is called Thanka, and it really is striking in color and detail.  I paid $40 for this painting, and even though Martesh was adamant that he didn’t want any money, he was asking if I could purchase some rice, oil and vegetables for his family for dinner.  Instead I gave him $20 (2000 Nepali rupee) and we parted ways.

I say I was a mark as I got the very nice, polite and courteous version of the hard sell at the Thanka place.  I also saw others (clearly tourists) like me come into the shop and get the same sales pitch from other guides who had pulled them into the shop.  But really, when you think about it $60 for a 3 hour guided tour with a hand made painting to take home at the end of it, I can say, I’m glad I was the mark this time.

I certainly didn’t feel like this was happening to me… and no, I didn’t buy this to take it home.

On my way back to my hotel room, I did manage to find one of the people in charge of all the wires up on those poles. 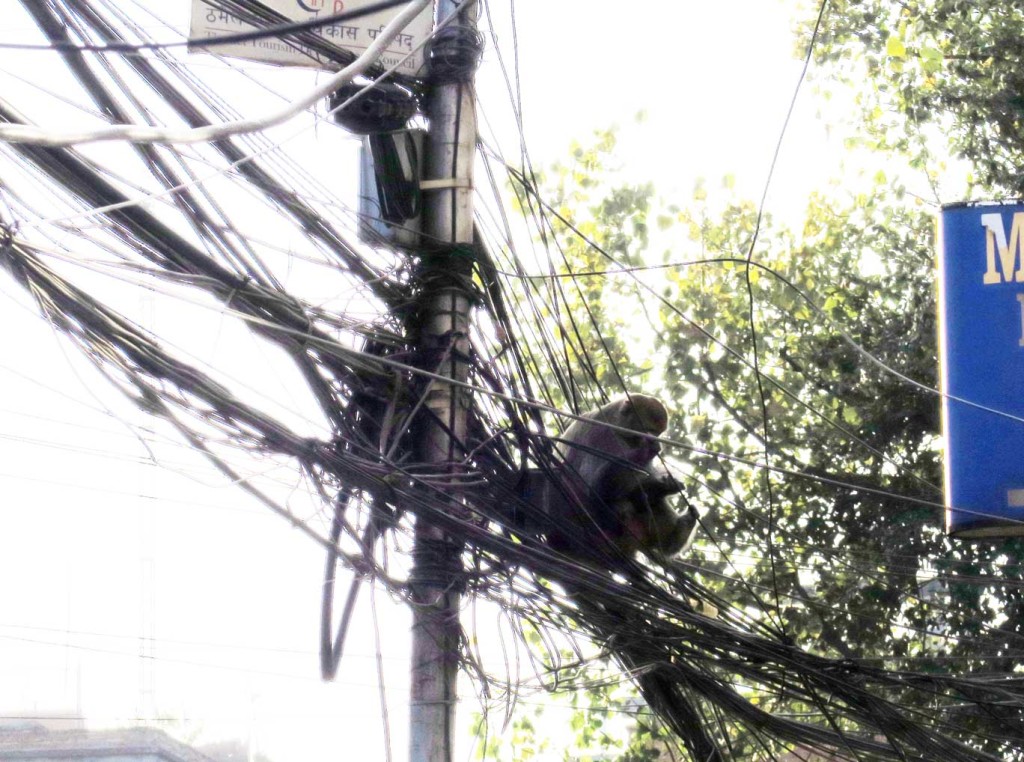 Yeah, that’s a monkey… in the wires.  Of all the troubles you’ve ever had with your Internet connection at home, I bet “monkey peed on the wires” was never a check box you thought existed.