Home Mister Dude Not snakes on a plane. CHEF on a plane!

This is Part 2 of my trip to Nepal.  If you missed the other parts you can find them here.

I don’t know how I missed taking a picture of this. But the flight actually had a French Chef on the plane.  I’m not too sure what he was doing, it’s not like they had an omelet bar back there, but they did have a dessert cart!  But I’m getting ahead of myself. 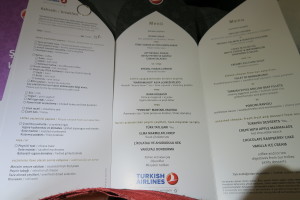 This is the menu, I left it large so you can click on it and see all the offerings.  Note that the dinner menu is on the right, and the breakfast options are on the left.

I later came to find out it isn’t much about what you choose to have, the seemingly brought you one of everything.  I had to try it all of course, and recall, this is after I just had a hamburger, fruit cup a white Russian and quite possibly 1 or 2 cookies.  Maybe 3.  If you know me, you know I’m not much of a cookie person, or milk, or Kahlua.  😉

Oh, did someone mention beverages?  Why yes Brett, you did.  That’s a different menu.  Double sided.

Remember, always stay hydrated while flying.  Especially when they have 15-year-old Glenlivet.  I didn’t have much of the alcohol while on the plane except for an Irish Cream & Hot Chocolate and the cold tea on the bottom of the left most beverage menu.

It was REALLY delicious, and it said it helped with jet lag, so I had a couple of those.  Really good, and I have to admit, I didn’t have too much jet lag when I touched down in Nepal, so that’s a plus.

So the trouble I have while traveling is the leg room, add to that I never get to put my feet up while eating and watching TV.   Wait.. What?  Yeah, it’s like Archie Bunker designed the entire experience. 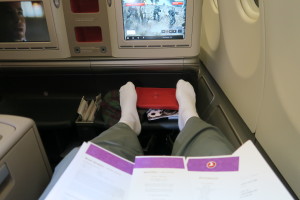 First, I had all the leg room I ever wanted and I got to watch an almost brand new movie where Tom Cruise kills a whole bunch of weird aliens (and it wasn’t one of his religious things, I’m pretty sure it was fiction).

Second, no sooner do I put up my feet, wash my face and hands with a nice hot towel does THIS happen: 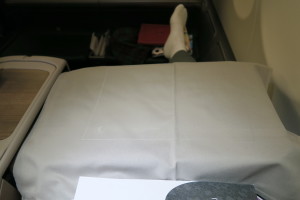 I start to think, “Wow, a table-cloth and lap napkin all in one, patents are being created right before my eyes.”

Then, then BOOM this…

Food… A LOT of food.  Tiny little dishes, expertly prepared, and tasty as tasty can get.  At this moment, I am NOT wondering what they are eating back in coach.  I AM wondering what I should eat first.

Oh, and on the upper right?  Yeah, that’s a flame less candle, flickering in a little paper container.  The guy actually turned it o 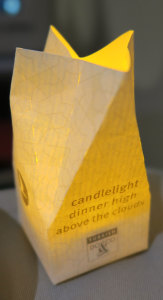 n by blowing on it a little.  There must be some kind of pressure sensitive switch in there to turn it on and off.

I would have messed around with it, but I was too interested in the food, and the movie (Day After Tomorrow).  Interesting premise.  It’s like the Ground Hog Day movie, except with a futuristic war…. And Tom Cruise instead of Bill Murray.

So getting back to the food.  Don’t think that was it.  That was like some sort of first course.

Yeah, I know.. because a few minutes later this came: 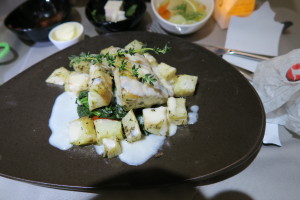 So after all of this, they clear my plate, and I think I’m done being bombarded by calories, and then this thing comes wheeling down the isle: 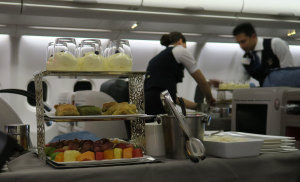 So there is fruit on the bottom… I can easily avoid that as I’ve already had my fruit for the day.  Then some baklava.  Which was spectacular for plane food, but only so so for baklava.  On top was a pudding or something of some sort.

On the right were balls of fresh ice cream.

Here’s what I had:

Food in this image is most certainly more caloric than they appear.

Seriously though… Ice cream, SCOOPED on an airplane.  What kind of sorcery is this?!?! 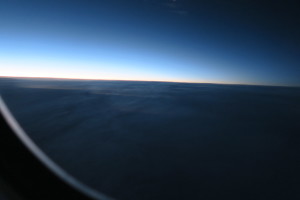 After I ate this, I finished up my movie, read a bit more about Nepal and then took in some sleep.  I woke up to the first of 2 sunrises I would see on my journey to Nepal.  It was pretty spectacular, and the photo doesn’t do it justice.

Of course, as soon as the flight attendants saw that I was awake, I was attacked with this: 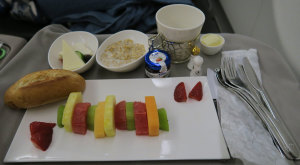 If you look closely near the strawberries on the top right, just above that is the salt and pepper shaker.  Yes, shaped like 2 tiny minarets.

Some oatmeal, good Turkish coffee (I assume, all I know is Starbucks is a bit bitter for my taste and I enjoy sugar and milk more than I enjoy the coffee I put it in) and good fruit except for the grapefruit they hid in there.  Really?  Grapefruit at this hour of the morning?  Have a soul!!

Once you are done eating your fruit and oatmeal though.  Which for me is a rather substantial breakfast even at home, then this comes: 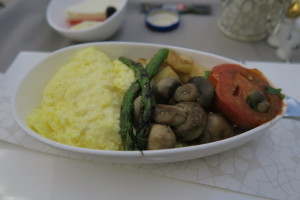 I think they were feeding us like this because at some point we all might have to get into hamster wheels and actually provide power to the aircraft.  That’s the only reason for giving us this much food.

Well my friends.  That ends the first flight, and this was the one leg I took the most pictures of food and space, so no worries, you won’t have to go through that again.

Stay tuned for the next post when I show you the Turkish Airlines Business Class Lounge.  Here’s a teaser… It has 2 floors and a race track.