This is Part 3 of my trip to Nepal.  If you missed the other parts you can find them here.

Normally when I make panoramic images I edit out the border where no picture exists.  Doing so might reduce the amount of space you could imagine this thing taking up.  Here, in this picture, is less than half of the entire size of the lounge.  Remember, the whole thing is two floors.

Allow me to take you on a tour of what we can see in these pictures. 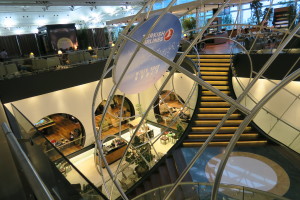 On the left on the bottom floor is a pretzel stand with some Turkish Butter.  They weren’t exactly pretzels, but they were being sold out in the airport for about $5.  They had all sorts of fixings for them (but no mustard).  There were also several teas available down there as well.

Up top is one of many seating and eating areas.  You can see two of the many coolers that had beverages of all sorts ready to be taken by anyone who wanted them.  (I’ve got a close up soon). 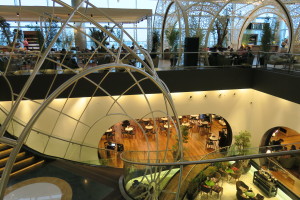 In this next photo you can see on the bottom floor more seating area.  This area had a lady making all sorts of coffee (she was one of three stations) and all the desserts you could possibly imagine.  To the left (you can’t see it) was a island of computers people could use to do whatever they wanted.  I used it to check flight schedules.  Another gentleman thought it would be cool to watch sensual music videos in his native language with the volume turned up as far as it could go.

Yeah, that got a little weird.  But he was happy looking at these scantily dressed women in the business class lounge for all to see.

On the top floor was more seating, eating and a hummus bar along with more coolers of beverages. 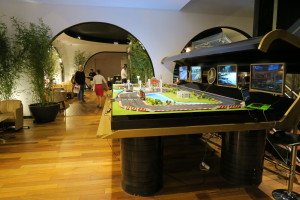 Back down on the bottom floor I found this slot car race track.  There were videos of car races and then behind me were play stations, xboxes and a couple of other consoles. 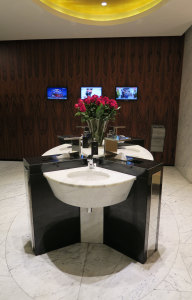 When it came time to use the facilities, I can’t say I was excited.  I mean, who likes using the bathrooms in an airport except… I don’t know.  Biologists studying viral strains?  However, it was a bathroom worthy of George Costanza.  Look at this thing.  That’s not all!  Then I stepped into one of the stalls. 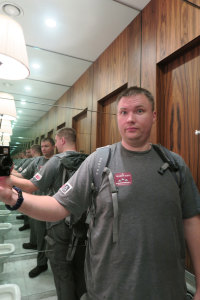 Check out the pipes in THIS bathroom.

Later (as I infinitely enjoyed the fine surroundings) I learned this was also where smokers, who don’t want to go to the smoking lounge, go to smoke.  That part was really disgusting. 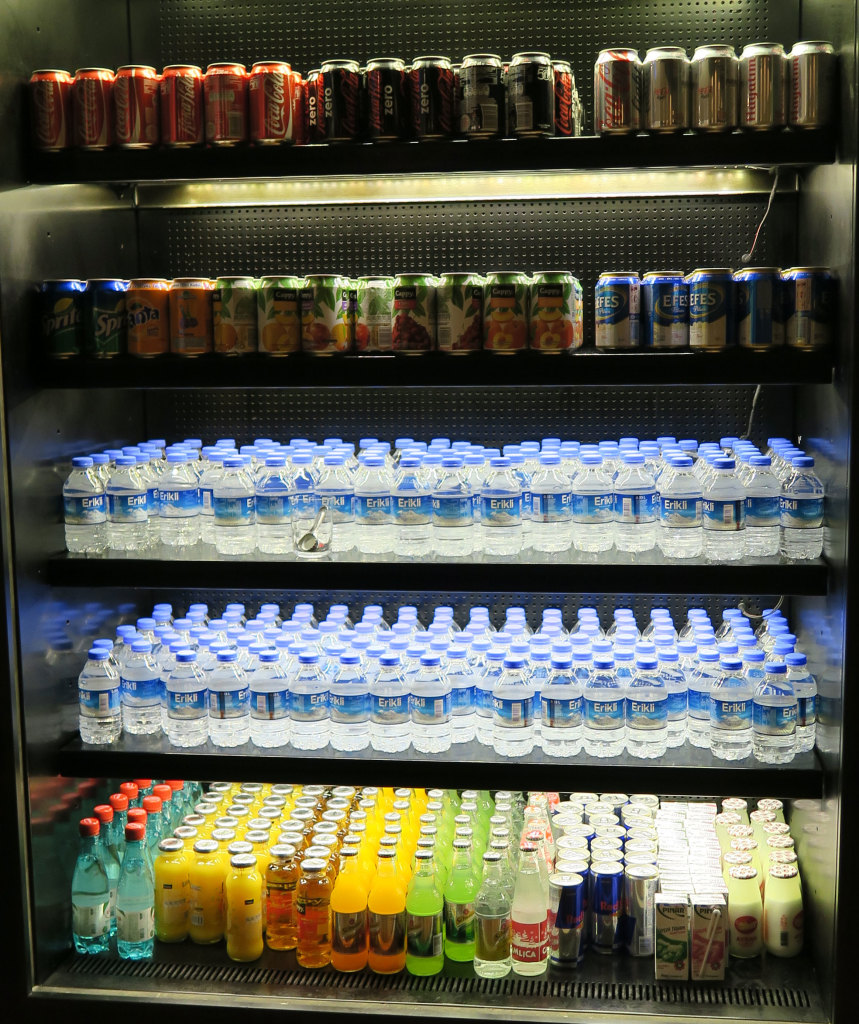 Now,  let’s move onto the beverages.  I mentioned there were these coolers all over the place.  I mean, you couldn’t look somewhere and NOT see one of these coolers.  And they didn’t stand alone.  They were usually twins or triplets.  We have just about any kind of version of Coke up on top, followed by fizzy soft drinks, canned juices and beer.  Next was a lot of water, and then more fizzy drinks, juices, redbull and that yogurt drink that no one ever drinks.

Add onto this there were (sitting around) nicely stocked bars with great rums, scotches, Kahlua, irish cream, Jack Daniel’s, etc.  There wasn’t much NOT on the cart, and as far as I could tell no one was watching what you took.  Though I always felt guilty about a long pour.

Not too guilty though, as I poured a drink and watched TV like Elvis.  There were 9 TVs and you could grab a headset and listen to whichever one seemed most interesting though.

Other things in this lounge that I haven’t mentioned, and for some reason didn’t take pictures of (I guess I’ll have to go back?).  There was a lady making… from scratch this delicious meat in a noodle, boiled with some sauce and a paprika over it dish.  This was delicious.

There was an area that had a Cold Play concert being projected in a dimly lit comfy theatre chair kind of room.  I like Cold Play, but I assumed once sitting in those chairs I would fall asleep and miss my flight.  There were fruit areas, a granola bar, 3 kitchens making grilled meat, chicken and veggies.  There were at least 2 guys making some sort of flat bread thing.  That was delicious too. 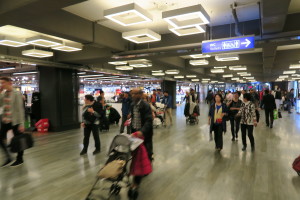 I did manage to make it outside of the business class lounge.  What I found was equally amazing.  I saw the largest Duty Free store I have ever seen.  I mean it was the size of the entire length of part of the airport.  It went ON and ON and ON.

This photo which only seems to capture a picture of the bathrooms well, was meant to show you the gargantuan size of the duty free store.  Instead, enjoy a bit of motion sickness as you watch crowds of people go by.

There were a few places selling traditional Turkish Snacks and other collectibles, which in my mind, weren’t all that collectable.  First, anything Turkish seems to either be covered in sugar, jellied, or jellied and covered in sugar. 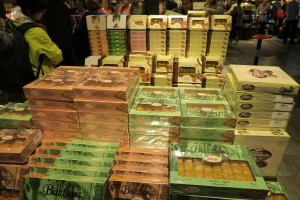 I present exhibit A.

Everything else just seemed like stuff that I could easily by at World Market or from Etsy. 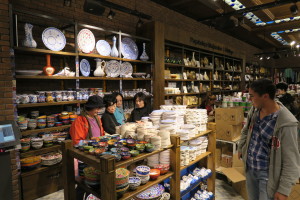 I also know that the time between my flights when coming back the other way is incredibly tight, so that anything I wanted I would have to purchase, carry with me to Nepal, and then carry back.  Nothing was worth it, though I did walk away with a few extra bottles of water from those coolers.

Now back at the business class lounge, I see that my plane is delayed for 3 hours.  I walk up to the concierge and ask “what can I do here” and it seems the only possibility was to take a shower.  So… That’s what I did.  I showered in an airport. 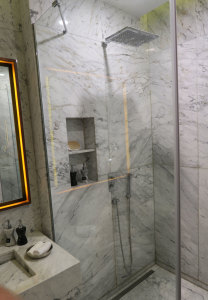 Somehow I think that phrase either makes you a hobo, or a high class flier.  I’m not certain which one I was so I’ll let you decide.

It was a really nice shower too, and nobody smoked.

In my next post, I’ll finally make it to my hotel room.  That’s when the fun REALLY begins.