I had the opportunity over the weekend to attend an event called “Physical Graph Hack Day“.  It was sponsored by SmartThings and held at iStrategyLabs in duPont.  I’ve got a lot of respect for both of these companies and here is why.

A bit about the place where the event was held

iStrategyLabs is the force behind DCWeek.  Leaning a bit towards the hacker side of things, only some of the conference appealed to me.  However, the people in attendance were energizing and it was an incredibly well run conference.  The speakers (that I got to see) were well spoken, and usually experts in their field with plenty of knowledge to share.  If you are a tech start up or serial entrepreneur (like I am) with a tech focus, this is a good conference to attend.

You could tell iStrategyLabs put a lot of passion into DCWeek 2012 and if you didn’t walk away at least learning something, or getting inspired somehow, it was your own fault.

Because of my attendance at DCWeek (I think that is how they found me) I was invited to this hack day with SmartThings.  Check out their website, and their video.  It will tell you a bit about the company and the platform, but I’m here to fill in the rest of it.

Totally, utterly cool & awesome.  Why?  Because they have the kind of knowledge, expertise, excitement and capability that presents a feeling of “can’t fail” but they don’t emit arrogance.  Far from it, they are all VERY down to earth.

I wasn’t exactly sure what to think when I was invited.  I’m not the worlds best coder.  I’m not even mediocre.  I can put together some Perl & Python given a good reference manual, but if you need a C++ function overridden with inheritance and garbage collection, I’m not your guy (Sorry CS professor Joe C.).

However, if you need someone to take technology, and do things with it, for which it was never intended, break it in ways it wasn’t supposed to break, and make it do things it wasn’t designed to do, then I’m your guy.

We start with CEO of iStrategyLabs Peter Corbett

The day started with a welcome from Peter Corbett CEO of iStrategyLabs.  During DCWeek, and even now, you can see the guy has a keen sense of what is coming next in the realm of user interaction with the Internet.  I’ve seen people like this at the IETF who could foresee the protocols the world was going to need in 4-6 years and start designing them.  He has a good finger on good design, hiring smart people, doing things a bit differently.  There also is an amount of risk in starting up a company like this, maintaining it, and making the business work over time.  It’s a hard sell to sell someone on “social & digital”, but companies need it, especially the big stodgy ones who don’t think they do.  (P.S.  To the people who were getting pitched as I left iStrategyLabs’ office around 4:30PM on that Saturday, you TOTALLY look like you need it.)

Then we get Alex Hawkinson CEO of SmartThings

Next came Alex.  He’s the CEO of SmartThings.  A VERY well spoken guy, and immediately likable.  I later found out he came from Minnesota, so that explained it.  🙂  He spoke about the history of the company, the kick starter project, and some of the funding stuff (that honestly was over my head).  He said that the whole idea started when there was a catastrophic cascading event of failures at his family’s cabin.  He thought (like anyone with a computer and a cell phone), “Why did this happen, and why didn’t I know about it.”  To solve the problem, his goal was to buy a bunch of products, and try to hack them together to a reporting system.

I knew his pain, right then and there.  Living in my own house that has:

Each of these things is not just unaware of each other, but designed specifically NOT to talk to one another.  THAT is a failure that I have, and that Alex had.  So where I threw up my arms and said oh f’it, he threw up his arms and did something about it.

They had an amazing KickStarter project, and that got a lot of people excited.  They’ve released some kits (on a very small scale) to get people interested and developing.  I would have called the event “Alpha Test version 2”.

There were some bugs in the development environment (that they told us up front).  There was some documentation missing (that they said would be coming).  There was some design considerations (they said they were debating about).  In other words, there weren’t any surprises, they seemed to know what their issues were, what the considerations are, and how to solve them.  Yet the products were incredibly functional, and you could foresee exactly what the possibilities were with the devices, the platform, and the integration.

The two engineers that came along (there might have been more, but I only interacted with two) were Bob and Jeff.  They were the kind of guys who, when asked a question, you could see the gears turning in their head, and the answer was spot on.  Just down to earth, get it done, consider the possibilities, and even ask for opinions.

I attended the event with 2 other guys I knew from work, so that made it easy to get a group together.  We tried to design our own virtual device, but found a few bugs along the way.  I have to say though, it was fun to think of the possibilities, and work with the devices that interacted in the real world (and did so effortlessly).

The coolest thing about all of this, and the awesome sauce that SmartThings adds to this, is the Perl factor (no, they don’t use Perl, but just read the next sentence).  Make the easy things easy and the hard things possible.  If all you want to do is lock your front doors at the same time every night  no problem.  If you want to bump up the heat, close the drapes, turn on the lights open the garage door as you near your place of residence, pretty simple.  If you want to get REALLY complex, well you can do that too.

Seems, if you want to hack at hardware, you can add your own devices to the system and control them.  They are offering an Arduino shield which means only one thing.  ROBOTS.  OK, well it means more than that.  But with all the things the Arduino is doing now, it isn’t a stretch to see there is NOTHING but possibility.

The bottom line (is only the beginning)

Let me sum it up this way.  I’ve played with X10 that regardless of channel selection turned on my lights randomly around 3AM, I’ve had weather stations that kind of reported data, I’ve had motion sensing cameras that detected changes in sunshine and I had a dancing penguin that I had to return because it had a limp arm.  They were all crap.  This company has a level of quality, knowledge and capability that makes me a supporter.

I can’t wait until my dev kit arrives.

Oh, and if you still don’t “get” what SmartThings is all about, check out the T-Shirt I got.  It sums it up with finesse and also shows you the company has a great sense of humor. 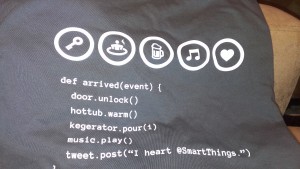